I finished my previous post on this topic with several questions.

Some folks may wonder if any observations linking hops to menopausal effects could exist in the Middle Ages.  After all, the average life-expectancy was quite low in comparison to modern times.  Didn’t most women die before reaching the age of menopause?  Or, did menopause occur earlier in Medieval days?

These questions are fairly easy to answer. Life expectancies (LE) can be computed in several ways.  Some of the more commonly reported LE statistics are prone to misinterpretation.  For example, a life expectancy of 45 might seem to imply that very few people live into their 6th or 7th decade of life. This is typically not true.  Why? A low life expectancy often reflects a very high infant mortality rate.  If a very large number of infants and children die (for a myriad of reasons), the LE rate will be significantly lowered. If an individual makes it unscathed through the first decade of life, they may expect to live decades beyond the reported LE for their society. So, while LEs in the Middle Ages were estimated to be in the 30s or 40s because of high infant mortality rates, substantial numbers of the populace still lived into their 6th and 7th decades of life (and beyond).  Many women lived to the age of menopause, so we should expect to see Medieval references to this consequence of aging.

A nifty little study published in Human Biology in 1973 addresses this issue directly. Amundsen & Diers report ages of menopause mentioned in a dozen sources from the 6th (Aëtius) through the 15th centuries (Ortolff the Bavarian). Almost all of the sources suggested that the expected age of menopause was about 50 years of age. Interestingly, this is very close to the average age of menopause that we see in modern society; around the age of 51. Therefore, if hops were used during the Middle Ages to treat the effects of menopause we should expect to see some Period references to this practice because many women lived long enough to experience menopause.

The second set of questions that I listed in my last post:

Someone asked me after reading my first entry on this topic, “Can we just drink beer to alleviate menopausal effects?” It turns out that this question is a very good one and I will address it in my next post. Effects of estrogenic compounds in beer might depend on the answer to the question, “Do you have the guts?”

In that post, I mentioned three specific compounds found in hops that have received research attention:  8-prenylnaringenin (8-PN), Xanthohumol (XH), and Isoxanthohumol (IX – the isomerized version of XH). I focused on 8-PN in my previous post. Herbalists and some researchers claim that 8-PN has the potential to serve as a non-steroidal supplement to alleviate some menopausal effects.

What about XH and IX? XH is not estrogenic, but IX is.  Even though IH is not estrogenic and therefore not a candidate for menopause-related therapies, it has been studied for its effects on cancer and cognitive function (fodder for another blog post in the future?)

With respect to IX, Żołnierczyk and her colleagues (2015) suggested that one of the most likely sources of IX in the human diet is beer. IX is actually a product of the wort boiling process in beer-making.  XH is isomerized into IX by thermal exposure during the wort boil.

This is where my question about guts is relevant. Research indicates that IX consumed in beer remains intact through the stomach and small intestine and is converted into 8-PN in the colon via a methylation process (Possemiers, et al., 2006; Bolka, et al., 2007; Żołnierczyk, et al., 2015).  Furthermore, the efficiency of this conversion of IX into 8-PN varies considerably depending on the individual.  Some individuals are more efficient at converting IX to 8-PN compared to others. The percentage of women whose guts transform IX to 8-PN in greater amounts is a fairly small minority. Bottom line: some women will experience greater 8-PN effects from beer consumption compared to others.  Even so, it is questionable as to whether the levels of 8-PN due to beer consumption in this small proportion of women is even therapeutic.  Some women “have the guts” to convert IX to 8-PN.

Where does this leave us? Theoretically, the estrogenic compounds in hops may potentially have positive effects on menopausal effects. In practice, these effects have yet to be validated and replicated. Whether the amounts of 8-PN converted from IX are high enough to be therapeutic also needs to be verified. More research is needed.

My remaining goal in this series is to identify Medieval references to the use of hops for menstrual/gynecological maladies.  While I’ve read many articles suggesting an ancient link for this use of hops, I have not seen actual documentation from a Period source.

I am currently making my way through a translation of a work attributed to Trota of Salerno: The Diseases of Women. Trota wrote this work sometime in the 12th century. So far, I’ve read about ¼ of the manuscript and have found no references to hops.  The search continues….

Mason-Hohl, E. (1940). The diseases of women by Trotula of Salerno (Translated from Latin). California: The Ward Ritchie Press.

Possemiers, S., et al. (2006). The prenylflavonoid isoxanthohumol from hops (Humulus lupulus L.) is activated into the potent phytoestrogen 8-prenylnaringenin in vitro and in the human intestine. The Journal of Nutrition, 13, 1862-1867. 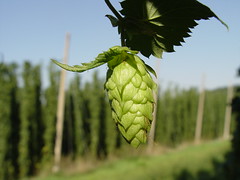